Published in the Spring 2009 issue of Vancouver Review, a nationally distributed quarterly magazine that focuses on ideas, culture and arts from Canada’s West Coast.  A collaboration with Museum of Vancouver‘s June – September 2009 exhibit Velo-City: Vancouver and the Bicycle Revolution. 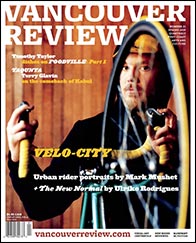 I didn’t know anything about Lance, BEST, or Vancouver, but I did know the quickest way to acquaint myself with my new city was to touch it – metre by metre – with the treads of a bicycle. Starting from my new home on Guelph Street (the same name as the Ontario city I’d just departed) and armed with a vague BC Transit map, I surveyed my Mount Pleasant neighbourhood on two wheels.

In the following months, my circles widened and I became familiar with the alleys, warehouses, dirt lots and secret gardens that radiated out from Main and Broadway. I ventured across each of the three False Creek bridges and joined segments of paths that followed the water’s edge. They led me to even more cycling adventures: soft, wooded paths in Stanley Park; goldenrod-lined dykes near Science World; breezy, crunchy gravel on Locarno Beach; and a maze of hard-packed forest dirt in the UBC endowment lands.

“It’s like hiking through the forest!” I marveled as each pedal stroke revealed a new turn of trees, “Only faster! And funner!” I was ten again – on my Supercycle, a lettuce-and-mayonnaise sandwich in my blue plastic basket, shoe laces coming untied, hands wrapped around white plastic grips with blue-and-white striped streamers.

I was free, flying, laughing out loud, grinning at dogs. I was in a new city – Vancouver! – and in a familiar place – on a bicycle! It was so simple. Could it get any better than this?
~~~

Over the next few years, Lance Armstrong collected awards in the international road bike scene that culminated in consecutive wins in the Tour de France. He drew the world’s attention to how dynamic, healthy and sexy cycling was. In North America, a group of California mountain bikers dragged their  cruiser bikes up a nearby mountain, bombed back down on its dusty fire roads, and celebrated their intact skulls with kegs of beer and bags of weed. They drew the world’s attention to how fun, social and ridiculous cycling was.

For obvious reasons, it didn’t take long for mountain biking to catch on in the Vancouver area. A collection of MTB riders, retailers and builders (known as “The British Columbians” in the Mountain Bike Hall of Fame) fanned the flame by importing fat tire bikes, then designing their own, then building trails on the North Shore; and then inviting Lower Mainlanders to take their made-in-BC bikes out of the city and into the forest.

Road bike and mountain bike cultures flourished, and other subcultures spored in the petrie dish of their acceptance: track, cyclocross, BMX, trials, downhill, dual slalom, freeride, freestyle, and others.

Bike couriers took the nimble road bike and stripped it down to single speed or fixed gear configurations. No accessories, no derailleurs, no gears, and sometimes no brakes. Adept bike mechanics, builders and racers followed suit.

Less experienced cyclists found mountain bikes were easier: they had tough frames, cushy tires, lots of gears and the bonus of a gnarly image. Woodsy BC’rs (and other North Americans) ate it up and soon just about every bike store in the Lower Mainland became a mountain bike store; and every man, woman and child who bought a bike became an urban Mountain Biker.

Emerging advocacy groups such as BEST and VACC (Vancouver Area Cycling Coalition) celebrated the renewed interest in bicycling, and campaigned policy-makers and stakeholders to make the city safer for cyclists. It’s good for quality of  life, activists like Richard Campbell argued, and for the environment. They threw terms like “sustainability” and “livability” around when most of us were still getting our heads around “global warming.”

From the slow, steady march of the backroom advocates sprung a band of irreverent but equally ardent subcultures: Critical Mass rides, car-free street festivals, community-access bike shops, Dinosaurs Against Fossil Fuel theatre, Wholesome Undie protests and – amongst it all and from a perch overlooking the Downtown East Side’s Pigeon Park –  a little special-interest magazine called “Momentum: for self-propelled people”.

Originally created in 2000 for Vancouver’s bicycle, rollerblade, and skateboard communities, Momentum eventually narrowed its focus to urban cycling culture. It gave a passing nod to the sport world; bear hugs to the activists; and garlands to commuters and scenesters. Still based in Vancouver, Momentum now distributes across North America but maintains its left-coast perspective. Publisher Amy Walker is determined to shine a light on city cycling’s creative, eclectic and important culture-makers.

As the decade comes to a close, it’s almost impossible to count up the number of bike-related groups, scenes, clubs, teams, collectives, coalitions, associations, ensembles, communities and tribes that now comprise Vancouver’s bike culture. That reflects well on us as a city; a vigorous bike scene adds colour, movement, bell-song and curb appeal. We have the best of both worlds: we’re dynamic, healthy and sexy and fun, social and ridiculous. Could it get any better than this?

A few years ago, Momentum offered up a “Field Guide to Vancouver Cyclists” that was mock-authoritative, beautifully illustrated and hilarious. It  identified the “Road Warrior,” “Weekend Recreational Rider,” “Fixie Rider,” “Recumbent Rider,” “Bike Messenger,” “BMX Rider,” and the “Common Commuter.”

“What about ‘Buddy‘?” I asked half-jokingly at the next editorial meeting. A few people looked confused.

“Buddy — in the flannel shirt and the work boots, who rides a  plain bike because he can’t afford anything else? Sometimes there’s a cigarette hanging from his mouth, and sometimes his handlebars are turned up so he can carry more plastic bags of deposit bottles. And sometimes,” I continued, “He’s pulling a  shopping cart, or a dog on a leash, or another bike. He’s a ‘Vancouver Cyclist’ too.”

Someone changed the subject.

Vancouver cyclist and commentator Chris Keam considers this an unfortunate “Balkanization” in the rise of the bike community. “The mountain bikers don’t relate to the transportational cyclists. The hipsters barely acknowledge us workadaddys towing kids on trail-a-bikes. Nobody is recognizing the integral role of the bicycle in the ability of binners to do their work; and nobody with two dimes to rub together is willing to admit to our common cause with homeless people in terms of cycling and our shared use of the bike as a tool.”

“There simply aren’t that many people out there who ride for transportation, recreation, and as a means of travelling long distances – and thus bridging the metaphorical gated communities that represent various biking subsets.”

Asks Keam, “Whatever happened to the good old days when cyclists would give a friendly wave to each other?”

We ride bicycles and like to think that as cyclists we’re all in this together: us versus the cars, the status quo, the weather, the hills, the boredom, the bridge, the bulge, and climate change. But as Vancouver bike cultures self-identify, our jargon continues to become more obscure, our equipment more specific, and our “membership” criteria more defined. It happened in the sport scenes (“Seven inches of travel!”), and now it’s happening in the city (“Filet-brazed seamless tubing!”).

To a novice cyclist, new Vancouverite or “Buddy,” that can feel very – gated. To a seasoned bike rider like myself, it’s close to cannibalistic.

Rather than reach out and present cycling as a simple, fun and natural activity for people of all ages, shapes, ethnicities and income groups, many of today’s cycle cultures are turning inwards and eating themselves. They’re fixating on the fit and fabric of their clothes; the finesse or crudeness of their frame welds; the righteousness of their zero-emission ride, and the sexiness of their selves and their steeds.

“Do North American commuters fetishize their bicycles?” queried Vancouver blogger Roland Tanglao earlier this year. Responses ranged from agreement that “Because we’re a minority, it’s easy to get a little fanatical,” to a suggestion that “Cycling culture has already taken a hint from the automotive world when it comes ‘Love of the Steed’” and we’ll see an increase in the “ground-swell of Bike Worship for its own sake”

Chris Keam sees it too, and thinks fetishization is an indication of the sporty West Coast’s “gearhead love of gadgetry and the latest, greatest must-have technology.” He wonders if it presents an image of affluence to the community that precludes “re-using” old but serviceable models.

“Rare are the middle-class folks willing to appear poor by riding an old bike,” he muses of a population that is otherwise eager to Reduce, Reuse and Recycle. He hints that the same attitude may exist with immigrants and ethnic communities and – having just returned from six months’ of visiting relatives in Goa, India – I have to agree.

Though bicycles ridden by men selling bread, fish, ice cream and plastics were a common sight on the state’s roadways, to Indians it was a transportation tool, not a cultural statement. The novelty of me – a  “rich” foreign women using a humble Indian bicycle to get around – prompted Goa Today magazine to send a reporter over to investigate.

“But – it’s just a bicycle,” he said, his eyes popping at the affluence of it.

Over time I met a few other women in India pedaling down shaded village roads in their salwar kumeez tunic outfits. They didn’t look sporty or environmental or trendy – they just looked determined. They weren’t part of a bike culture, but they were a few of India’s hundreds of thousands of cyclists.

To paraphrase sex columnist Dan Savage – just because we all do the same thing doesn’t mean we’re a community. I agree, and see it as a good thing. What if – instead of a “community” – we were just “a bunch of people who ride bikes”? Anyone who wanted to ride could do so without a cause and without thinking about their bicycle said about them. We could throw open the gates and do away with differences between cliques, tribes and subcultures.

Cycling for fashion, fitness, fundraising or frog habitats would make as much sense as, say, swimming for scoliosis, or perogies for peace. “Cyclists” would become people again, and bicycles would regain their role as simple, useful tools of transportation.

It could become the new normal.

Roland Tanglao suggests that when we no longer have to justify or evangelize bicycling –  when it’s just a normal part of our culture instead of being done by “enthusiasts”’ or “fashionistas” – we will no longer need blogs like his. 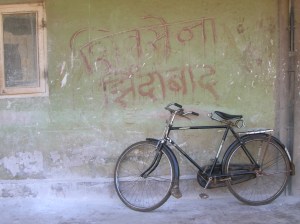 I suggest that – freed of its cultural and idealogical trappings – the bicycle is just a bicycle. It doesn’t care if you are rich or poor, sedate or sporty, studly or sexy, passive or political. It’s just a useful combination of metal, rubber, wheels and gears designed to carry you and your sense of purpose through space in the most elegant manner possible.

Get your cycle and get to know Vancouver, slowly. Pedal around and across the city, and you’ll be reminded of important things; to breathe an island of lavender on 10th Avenue, to pause for a lone bagpiper on the Fraser River, and to chase a hard-packed forest path through Pacific Spirit Park.

When she’s not gallivanting in Goa, Ulrike Rodrigues lives in Vancouver and writes on alternative culture and travel, including “The Adventures of Mitey Miss” for Momentum Magazine. Read more on her web site (www.ulrike.ca), or her India blog “Girl Gone Goa: tales of travel, sex, magic and cycling in an Indian State” (www.girlgonegoa.wordpress.com). She welcomes all opportunities to write about cycling and other fun stuff. Contact Ulrike Rodrigues.